This was a great kid-friendly meal and was pretty quick to prepare.  I made a couple of tweaks to the side dish since succotash is a fairly forgiving recipe.

Succotash is simply a side dish consisting mainly of corn and lima beans.  It came about during the Great Depression when there were very little resources, and corn & lima beans happened to be cheaper vegetables then most.  There are so many variations out there, and it's hard to find one made exactly like another.  So have fun with it and add whatever suits you!  My changes are below in brackets.

Thank you, as always, to the Food Network! 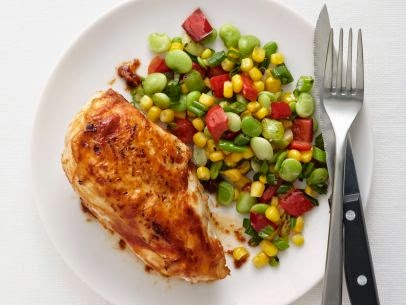 4 skin on bone in chicken breasts( I used thighs)