Sausages With Acorn Squash And Onions

Do you know your sausages?

I used to get very confused when a recipe called for a specific sausage - Italian, Andouille, Chorizo, Merguez, Bratwurst, Hungarian, the choices are endless.  It took me a while to understand the differences among the various types available, and I did that by tasting, tasting, tasting!  And of course researching as well.

My new favorite sausage is Andouille.  So even when a recipe calls for some other type, I most often sub in the Andouille when I can find them at the local grocery store.  Andouille is a heavily smoked pork sausage, usually made from chunks rather than ground meat and is seasoned well with spices, onions and garlic.  It's flavor is intense, and it adds dimension to any sausage dish.  Try it, you'll love it!

I have also been making attempts at recipes using only in-season, low budget ingredients.  The holidays really emptied the good ol' bank account, and I guess our 10 day trip to Mexico contributed to that.  I'm determined to buy the least amount of ingredients weekly and stretch them to their limit, using meats already in our freezer.  My hope is to stick to a maximum of $50 per week for the family for the next little while.  It's doable since we only really need to replenish fresh produce and dairy products.  It also helps that I'm an EXTREME couponer!  For this recipe, I only had to purchase the cheese and the squash, which is super cheap right now since there is such an abundance of them at this time of year.

This recipe was adapted from Everyday Food Magazine - thanks again Martha! 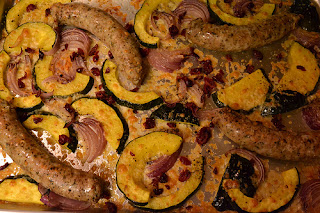 Preheat the oven to 475.  On a baking sheet toss squash & onion with oil and arrange in an even layer.  Season with salt & pepper.  Add sausages to the sheet & roast 15-18 minutes.  At about 10 minutes in, I noticed that the bottom of the veggies were beginning to burn, so add some liquid - like chicken stock or water, to keep the bottom of the pan slightly moist.  Heat the broiler.  Sprinkle cheese and sage over veggies and broil until browned & bubbling and sausages are cooked through, 3 more minutes.  Sprinkle with cherries and serve.

I didn't serve anything with this dish since the protein & veggies were already there.

Try this with different sausages to determine which you like best.  Enjoy!
Posted by Foodie At Heart at 2:02 PM