I truly don't know what I would do without my beloved slow cooker.  I have said this over and over in every slow cooker recipe post, but I can't stress it enough.

In this case, I took a recipe that was not meant for the slow cooker, and threw everything in there anyways.  I knew I wanted pork, and I knew I wouldn't have enough time on a week night to make it the way I wanted to, so I pulled out my trusty friend and dumped everything in there.  With a few little tweaks, it turned into a wonderful slow cooker recipe.

The picture below is how would have looked, had I made the recipe the way it said to.  Thank you, dear Chatelaine.  Oh, how I love your recipes. 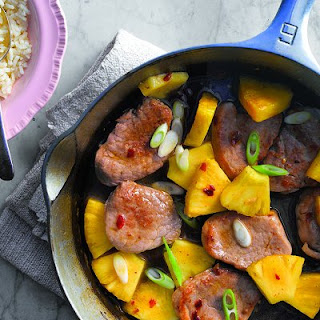 I will put unedited recipe, as well as what I actually did, as always...

Chili-Cinnamon Pork With Pineapple
1 large pork tenderloin (I used pork shoulder - great in the slow cooker)
1/2 tsp each of cinnamon and salt (I used a lot more..not sure of exact measurements, maybe 2T each)
1 T Olive oil (I didn't use any - no need to use any fats or oils in a slow cooker)
1 1/2c pineapple juice (I used a can of pineapple chunks, with the juice)
1 tsp red chili flakes (I used about 2T)
1/2 pineapple cut in 1/2" pieces (I omitted, since I used the can with the chunks already)
1 green onion thinly sliced (I omitted)
I also added ginger ale to cover the pork, and when I got home from work I added in a can of sweetened condensed milk.  Near the end of the cooking process, I added flour, but more on that below.

Slice pork into 1/2" rounds.  Combine cinnamon and salt in a small bowl and sprinkle all over pork.  Heat a large frying pan over medium-high.  Add oil, then half of the meat.  Cook until lightly browned, about 2 minutes per side.  If meat is browning too quickly, reduce to medium.  Transfer to a plate.  Repeat with remaining meat, transfer to a plate, and cover with foil.  Pour pineapple juice into the pan.  Sprinkle in the chili flakes.  Bring to a boil.  Using a wooden spoon, scrape up any brown bits.  Boil, stirring often, until liquid reduces to half a cup, about 10 minutes.  Return meat and any juices to the pan.  Add pineapple.  Reduce heat to medium.  Gently boil uncovered, stirring occasionally, until meat is warmed through, about 2 minutes.  Transfer meat and pineapple to plates and spoon sauce over top.  Sprinkle with green onions.  Serve with rice.

Not a bad recipe and cooking method.  Not bad at all.  But way too much work for me on a night when I'm tired and just want to eat.  So here is what I actually did:

Throw everything into the slow cooker.  As I mentioned above, I topped it off with ginger ale just to ensure the meat was covered with liquid.  I also put a lot more cinnamon and chili flakes in.  I threw in some Cajun seasoning as well.  Put on the lid, and turn the heat to low. Go do whatever you want to do for about 8 hours.  When the time is up, take the pork out of the slow cooker carefully - don't splash, it will hurt, I promise you.  Put the meat in a large bowl.  Get some flour (about half a cup) and mix it up with water in a small bowl until it's thinner than a paste, but thicker than just liquid.  Add that to the slow cooker liquid, mix it up, add a can of sweetened condensed milk, mix it up and put the lid back on.  Turn it up to high.  Then take 2 forks, and shred your meat into pieces.  It will shred easily, it's been cooking all day, remember?  Throw your pieces back into the liquid and stir it up.  Let it cook for about half an hour more on high.  Eat it over rice.  Incredibly delicious.