We don’t normally have pasta for dinner in my house, but I’ve attempted to lighten up on the whole carb-hating mentality and at least allow my family to indulge (once in a while).  Who am I kidding, I often indulge as well!  This recipe was fairly simple, without a lot of hands on time.  I made a big batch, so we were eating it for days.  No one got sick of it though!  You can eat it with anything really, but because it’s so rich, I served it with a side garden salad.  I did tweak the recipe a bit to lighten the fat load; it was still utterly delicious! 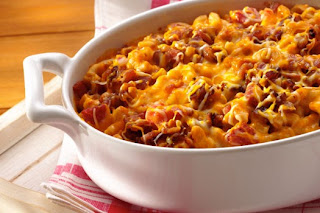 Preheat oven to 350.  Grease a 9x13 baking dish.  Cook pasta 8-10 minutes.  In a large skillet over medium heat cook bacon until crisp (I microwave my bacon on a paper-towel lined plate, which traps a lot of the fat, and then I wipe it with towel again when it’s done to get any leftover drippings).  Stir in pasta sauce, black pepper, and cooked pasta.  Spread mixture into prepared dish.  In a medium bowl combine next 4 ingredients.  Stir until smooth.  Pour gently over the macaroni mixture.  Sprinkle with cheese & bake 30 minutes or until golden brown.