I had never tried paneer before, but I love cheese so figured why not give it a try.  Paneer is an East Indian cheese made from coagulated whole milk and lemon juice.  It's fairly easy to make at home, or so I have heard, but I figured for our first try I would buy a pre-packaged version.  It's extremely inexpensive and can be found in most grocery stores.

I opted for the chili flake paneer, since it was on sale, and you can't go wrong with a little extra flavor.  I googled various recipes and picked the one that appealed to me.  Check it out below - the family loved it and I'm sure you will too. 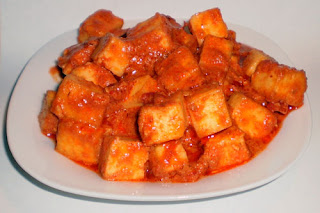 Heat the oil in a large skillet over medium heat.  Cook the onion & garlic 5 minutes.  Sprinkle in the seasonings and cook 30 seconds.  Pour the tomatoes in and cook until the excess liquid evaporates, about 5 minutes.  Add paneer, water, sugar and salt to the mixture.  Stir gently so that the paneer doesn't break apart.  Cook for 10 minutes.  Stir in the cream (or milk) and simmer 5 minutes.  Sprinkle with cilantro and serve.  I served this over rice, but it would also be great with warmed pitas, or over any other grain.

For the canned tomatoes, simply purchase as many fresh tomatoes as you would like (preferably from the farmer's market) and start stuffing them in large mason jars.  Use the end of a wooden spoon to push them down.  After every couple of tomatoes, add some crushed garlic, thyme, salt and pepper (or whatever other seasonings you would like - basil, oregano, etc).  Continue with tomatoes, pushing down, and seasonings until the jar is full.  Once all of your jars are full, seal them with clean lids and boil in a large pot for about 45 minutes.  Make sure you bring them to room temperature and ensure that the lids are sealed before storing them.  With this method, my family has fresh tomatoes all year round, and we purchase them when they are the cheapest and freshest.

Posted by Foodie At Heart at 6:35 PM No comments:

The hubby and I were recently watching a documentary that I urge everyone to check out.  It's called Fork over Knives.  Directed by Lee Fulkerson, this film examines the claim that most cancer and other diseases are caused by eating animal protein, and that vegetable protein actually does the opposite by eradicating disease.

Thanks to my obsession with food, I thoroughly enjoy watching films like this one, since I feel it educates me and allows me to make empowered decisions about what I put into my mouth, and the mouths of my loved ones.  Watching them often inspires me to change our diet completely, if only for a short time, but usually leaves a lasting impression and one or two permanent changes.  Another great one to watch is Food Inc.  I guarantee it will change the way you look at food forever.

With that being said, we have decided try the vegetarian thing more often; not just on Mondays.  Tonight I will be making a vegetarian lasagna that looks fantastic, with artichokes, sun-dried tomatoes and provolone cheese.  Last night I made clam chowder and a smoked salmon rye bread pudding.  Thanks to Michael Smith, one of my absolute favorite chefs, the meal was great.  Check out the recipes below. 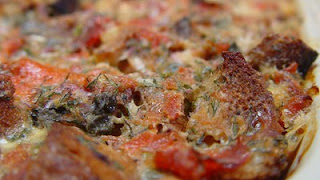 Preheat the oven to 350.  Toast the bread slices until golden brown and then cut into cubes.  Place in a large bowl with the salmon, onions, and capers.  In another bowl, pour in milk, eggs, dijon, salt, and pepper.  Stir in the dill and cheese.  Pour the wet mixture over the bread cubes and toss well to combine.  Let it rest for 5 minutes so the bread can soak up the liquids.  Pour into a lightly oiled 8x8 baking dish and bake until puffy and golden brown, about 45 minutes.

Now I must say that mine seemed rather dry after it had rested, so I added about another cup of milk, 1 more egg, some more dijon, dill and salt and pepper.  I also baked it for about an hour - it was still too wet after 45 minutes.  If you enjoy lox and bagels as much as I do, than this is a real treat. 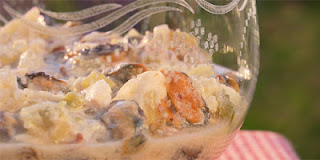 Brown the bacon with a little bit of water (this is a trick I learned from Michael - it helps it crisp better without burning) in a soup pot until crisp.  Add the onions and celery with about 1/2c water.  Saute for a few minutes until soft.  Add the wine, cream (or evaporated milk), milk and juice from the clams.  Add the bay leaves, thyme, and grated potato and bring to a slow simmer.  Continue simmering for 15 minutes or until the potato softens and the chowder thickens.  Add the clam meat, fish that you are using, evaporated milk and parsley.  Bring back to heat.  Taste and add salt and pepper.  Serve

This chowder was fantastic, and it's great that you can add whatever fish you have on hand.  The bread pudding can be shaken up as well.  Instead of smoked salmon you could use bacon, and change the havarti to cheddar.

Play with your recipes, use what you have on hand, tweak them to incorporate what you like, remove what you don't.  Have fun with food, I always do!!
Posted by Foodie At Heart at 6:13 PM No comments:

Slow Cooker (or not) Sweet and Sour Beef

I had some cubed beef in the freezer that I needed to use up, and I had a great recipe for it that seemed easy enough, but it was for the slow cooker.  So I decided to make it sans the slow cooker.  It turned out to be a wonderful, easy, quick dish.  I'll give you the slow cooker version below, but as always, I will add in brackets what I did differently.  Enjoy! 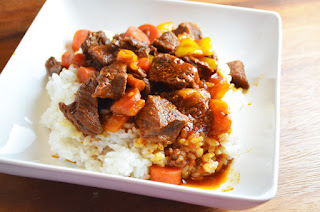 In a large skillet, brown the meat in the oil.  Transfer to the slow cooker.  Add in remaining ingredients and stir well.  Cover and cook on low for 8 hours.  Serve over rice.

Easy enough - but unfortunately I didn't have the time to use a slow cooker, so I browned the meat, and then added the ingredients and simmered for about half an hour.  It was delicious, and it doesn't get any easier then this!

Posted by Foodie At Heart at 10:44 PM No comments: