So as mentioned in the last post, next up was salad night.  I’m determined to get more fruits and veggies into my family’s belly, so I’m sticking to my guns.  With that said, my boyfriend is a home renovator and works very hard during the day.  He’s a meat and potatoes kind of guy, and is having a little trouble with some of the daintier meals I’ve been preparing lately.

He had called me and let me know that he was going to be working a few hours late, so I decided that in addition to making the salad (which I was fine with eating), I would also make him a ‘real’ meal with some substance.

When you need a meal in a pinch, without having prepared, Campbells has some great recipes – I kid you not.  So to the menu last night, I added Campbells Roasted Red Pepper Chicken - it's been featured on their commercials lately, so it had caught my eye.  As always, I will give you the recipes below; they were both a hit.

The other thing that I’ve been having great fun with is cooking with my daughter.  As I mentioned earlier, I have 2 children.  One is my 11 year old daughter, and the other is my 9 year old step-daughter.  They are great kids, but my step-daughter is a fairly picky eater, so when she is here I try and please her tastes with a little less daring recipes.  My 11 year old likes trying new things, and I am determined to teach her how to cook.  When I was growing up, I wasn’t allowed in the kitchen, and when I finally moved out on my own (at a young age…more on that another day) I survived off of hot dogs and Kraft macaroni and cheese for many years.  I have been emphasizing the importance to her of learning to take care of yourself and she is truly enjoying the cooking piece.  So she helped me cook dinner last night.

For all you lovely mothers out there who don’t want their children in the kitchen, keep in mind that not only is my child learning how to prepare a meal, but she is learning math (fractions with the ingredients) and how to follow steps to get to a goal…it’s great, and I get her to wash up the dishes with me afterwards, so less  work for me, yay!

So we started with the chicken recipe…super easy, see below:

Campbells Roasted Red Pepper Chicken
4 chicken breasts (I used 6)
1 can condensed cream of chicken soup
1/4c chopped roasted red pepper
1/4c apple juice (I used about 1/2c as it seemed to need more liquid)
2 T ketchup (I used a little more, but didn’t measure, just squirted it about 3 times around the pan)
4 garlic chopped
¼ tsp black pepper (I used a few dashes more)
2 T chopped basil (I had this out on the counter ready – but forgot to use it!  Blame the percocets!!)
1/4c shredded mozzarella
2c hot cooked rice (I threw this in the rice cooker before I began the dish)

Brown chicken well in a large skillet over medium-high heat.  Reduce heat to medium and stir in soup, red peppers, apple juice, ketchup, garlic and pepper.  (It was at this point that I realized more liquid was needed, I also had to turn it way down as med-hi on my stove is VERY high so the chicken was about to burn…eeks!)  Heat to a boil (mine was already boiling).  Reduce heat to low.  Cover and simmer until chicken is cooked, 20 minutes.  Add basil (if you remember to use it!) and stir well.  Serve on the rice and sprinkle with cheese.

It was great, and super fast & easy to make.

The salad was fantastic as well.  This one came from Women’s Health magazine.  Now I usually find their recipes to be a bit over the top.  They usually require ingredients that are impossible to find, or are never kept on hand in your kitchen.  But lately I have noticed a change in what the publish, and I’m pleasantly surprised, so I will be making more of their dishes and experimenting with what they have to offer. 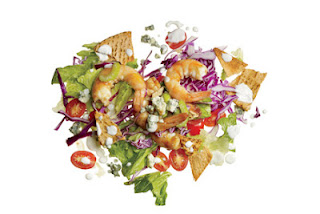 Women’s Health Buffalo Shrimp Salad With Spicy Pita Croutons
1 small whole wheat pita
1 large pinch of chili powder, garlic powder, and black pepper
1 T bbq sauce (I used Sweet Baby Ray’s – use whatever you have on hand)
1 dash hot sauce (I used srirachi)
10 large shrimp boiled (I used a medium size bag, why count??)
3c romaine lettuce (I used spinach leaves – healthier and tastier if you ask me)
1 celery thinly sliced (I used 2)
1/2c shredded red cabbage (I used a pre-made bag of coleslaw mix, ½ the bag)
1c halved grape tomatoes
1T crumbled blue cheese
DRESSING:
1 tsp sugar
1 ½ tsp white wine vinegar
2 T water
2 T nonfat Greek yogurt
2 T light mayo
1 T crumbled blue cheese
(for the dressing, I used President’s Choice Light Blue Cheese dressing and crumbled some fresh blue cheese in with it; I had it on hand, and figured I might as well use it up rather than making a new dressing…use what you have!)

Combine dressing ingredients and set aside.  Cut pita into eighths.  Spray with cooking spray on the both sides (I spread a very thin layer of garlic butter on both sides instead).  Sprinkle with chili, garlic, and pepper.  Toast in a 400 degree oven for 8-10 minutes until golden.  Set aside.  Whisk bbq and hot sauces together.  Toss shrimp with sauce and set aside (I put it in the fridge to wait – it only takes a few minutes for shrimp to grow bacteria, so be careful, it must stay cold!).  Combine all other ingredients in a large bowl and toss well with dressing.  To serve, divide salad among bowls, top with shrimp, pita croutons and blue cheese.