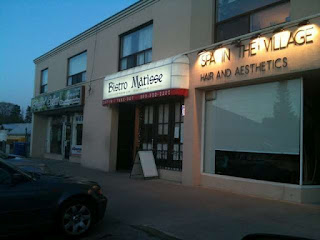 Since I'm so painfully careful about everything I do, I wrote a bunch of posts over the past few weeks to mull over before I started actually publishing online.  I've decided to post them all tonight so that I am up to date, and then I can begin posting daily, or weekly, as time permits.


A few weeks ago my boyfriend and I decided to go out to dinner.  We had received a flyer in the mail for what looked like a quaint little French Bistro in the Clarkson/Port Credit area called Bistro Matisse.  The reviews online were hit and miss – some people raved about the place, others hated it, so we decided to check it out for ourselves.

First impression upon arrival?  Small.  Homey.  Rustic.  Typical for a little Port Credit Bistro, I would say.  There is no privacy in the place, even if you whisper, the table on the other side of the very small establishment can hear you, but what the heck, we were there, we were hungry, and so we sat.

The waiter came over and told us 3 times that our bread was in the oven, and on the third visit he said that he would like to let us know of the specials for the day.  No problem.  We like specials.

He told us about the leek and potato soup (‘no cream, we use flour to thicken our soups…but it’s still very thick’), a few other soups of which only the French Onion I can remember, and than the entrees.  Steak in a peppercorn sauce with a lobster tail, and about 6 more…I can’t remember ANY of them.  It took him 10 minutes to go through the specials, and by than my boyfriend and I had mentally checked out.

He than left us to go get the bread that was warming in the oven.  Yum!  Who doesn’t love fresh baked bread??  He brought it over and asked what we would like to drink.  My boyfriend ordered a bottle of blue and I ordered a Bacardi Breezer from the menu.  No Bacardi Breezers.  I was told no one has ever ordered a cooler.  (Than why is it on the menu??)  Ok, I will take a Rye and Ginger please.  No ginger.  Really??? So I settled for a vodka and coke.

He left to get our drinks and we started in on the bread.  Mmmm…fresh baked, warm, wait…is that freezer burn I taste?!? It is.  And it’s horrible.  If the décor and the lack of drinks weren’t the strike one, this definitely was.

My boyfriend and I are pretty optimistic people, and when you’re hungry you hope for the best, so we moved on to ordering our entrees.  I figured the easiest thing for me was to order the steak and lobster special.  I was a bit concerned about the frozen bread, and didn’t want to risk ordering anything odd off of the menu only to be hit with more delightful freezer-flavor.  If it’s a special they’re probably serving a lot of it right?  This line of thinking would probably be a little more logical if there were customers in the restaurant, but since we were one of 3 couples on a Friday night, I guess I deserved what I later got.

My boyfriend went ‘safe’ as well, ordering the “Matisse Platter”, figuring that since we were at Bistro Matisse, this would be a specialty of theirs.  Nope.  The waiter said ‘no one has ever ordered that before’ (like the Breezer?) and he didn’t know what came with it.  My boyfriend read the menu to him so that he could get up to speed.

The waiter also asked us if we would like to start with anything.  We looked at the menu but were cut off, and told that our meals are fairly large so he would just split the ceaser that he had forgotten came with my boyfriend’s meal, so that we each got some.  He told us this would save us money too.  Great, thanks.  I guess he thought we were trying to save? Or maybe he was saving us from the appetizers?  Who knows.

Things weren’t looking good.  The McDonalds across the street was beginning to look fantastic.
I am happy to report that the ceaser was great, if you like a lot of garlic.  We do, so this was just what we needed to renew our faith and give us strength to face the rest of the meal. The only complaint I had here was that we were only given our dinner fork, no salad fork.  Their dinner forks are VERY heavy and strangely shaped, so eating the salad was awkward and cumbersome.  It was delicious though.

We waited about half an hour for our meal.  Reasonable amount of time in my eyes.  Our food was brought to the table and I was starving.  My absolute favorite food to eat is a lobster tail, so I dug in.  Not bad.  Definitely frozen.  A little water-logged…but edible.  The steak was okay;  rubbery, not very well seasoned.  The vegetables were clearly frozen; they had the same freezer-burned taste of the bread.  The potatoes were cold so I didn’t even bother, and the shrimp was well cooked, but also cooked from frozen.

I didn’t try much of my boyfriend’s meal, so my review is based solely on presentation and his word.  His dish was 2 lamb chops, 1 chicken breast, shrimp, mussels, calamari, potatoes and vegetables.

Enough to feed a king.

His chicken looked boiled with very little seasoning.  His shrimp was okay, I tasted it, very fishy.  He said his lamb was good.  The potatoes and veggies were the same as mine, so no explanation needed there.  The calamari was rubbery.  My boyfriend’s take was that the seasoning was great, It’s just a shame that everything was so clearly frozen.  There is no mistaking it.  Fresh would have been so much better.

We finished what we could of our meals (we packed up the rest) and decided to check out the desserts.  I heard the other table that was there ask for a dessert menu, and the waiter said that ‘telling you what we have would be easier” so I didn’t bother asking for a menu and just asked what they had.  He told us about the crème brulee that is ‘definitely fresh, I saw them make it today”, apple pie (no comment on freshness there), a couple other items that I zoned out on, and the profiteroles.

Well…my boyfriend and I LOVE profiteroles, so what the heck, why not give them a try?  The waiter said they’re great, and he would be right out with them.  Lovely…looking forward to it.
Five minutes later, he came out with a martini glass filled with 5 profiteroles, whipped cream, and chocolate syrup.  We ate.  They were okay.  They were warm.  I think that was their only saving grace.  The whipped cream was from a can.  The chocolate syrup was Nesquick.  I know this because we use the same syrup at home for our kids…and I have been known to squirt a little in my mouth every now and than.  They would have been much better without that damn freezer-burned taste.  EVERYTHING had the same freezer taste.  I hate that taste.  I think it’s awful that I am paying for that taste when I can simply pull out an old eggo waffle from my freezer at home and have that taste for free.

The waiter sealed any doubt I had about the frozen profiteroles when he cleared our table and said ‘aren’t they great?  I eat them frozen sometimes’ ..you mean, rather than warming them up in the microwave in your kitchen back there?  Thanks.  You could have at least pretended they were fresh.

Bottom line…go to the Chinese grocery store and buy a lobster for 9.99/lb.  Cook it and eat it at home.  Throw a couple of steaks on the BBQ for 20.00…cook it how you like it.  Steam some veggies.  Fry some dough and squirt custard in it (I can give you a recipe another day).  Maybe an hour’s worth of prep work, and 40.00 later you will have yourself a fantastic meal for two.  We spent 115.00 on our meal and it sucked.

The moral of the story?  Homemade is ALWAYS best!!

http://www.bistromatisse.ca/
Posted by Foodie At Heart at 5:44 PM