Recently I made a meal fit for kings.  God, I love cooking!  But I love eating it even more!

I made Bacon Wrapped Tenderloin with a Roasted Vegetable Salad.  I’ll give you the recipes below, and in brackets I’ll tell you what I did, since I always change the recipes I have to suit my needs and tastes.  I’m also a strong believer of substitutes.  I’m not running to the store for one ingredient when I can improvise and use what I have in the fridge.

Below is how it should have looked had I followed the recipe exactly, courtesy of the fabulous Chatelaine Magazine: 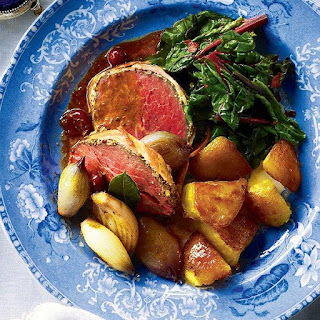 I’ll give you what the recipe says to do, but I did mine completely different as far as the cooking method goes, so I’ll give you that as well.

The recipe says to preheat the oven to 500.  Set a rack over a roasting pan.  Stir mustard with horseradish in a small bowl and set aside.  Peel shallots and trim off roots.  Cut larger shallots in half.  Place in a medium bowl.  Add EVOO, vinegar, sugar and salt.  Season with pepper and toss to coat.  Pat meat dry with a paper towel.  Remove any string around the filet.  Spread mustard mixture all over meat.  Drape bacon over tenderloin in an overlapping criss-cross pattern.  Tuck bacon underneath tenderloin so it goes all the way around the beef.  Transfer to rack in roasting pan.  Roast in the center of oven for 20 minutes.  Stir shallots.  Reduce heat to 300.  Continue roasting until 145 degrees internally, 40-45 minutes.  Transfer to cutting board and tent with foil.  Transfer shallots to serving dish.  Set roasting pan directly over 2 burners on med-hi.  Add port and cranberries.  Bring mixture to a boil, stirring frequently, mashing cranberries until tender, 3-5 minutes.  Jus should measure 2/3c.  Top mixture off with hot water to make a full cup.

Ok…thanks for coming out, but that cooking method is WAY to tedious and long for my lifestyle.  So here’s what I did.

I coated each piece of meat with the mustard horseradish mixture, wrapped each with a piece of bacon, than put a little more sauce on the bacon.  I heated a pan to med-hi, put a little oil in there, and seared them for 5 minutes per side.  I removed them from the heat, put them on a plate and tented the with foil.  Than I drained most of the oil out of the pan and reduced to medium.  I added the shallot mixture (all 5 of them..LOL) and added probably about a cup of my cheap red wine.  I let it boil for a minute or two and than tasted the sauce.  It needed more brown sugar so I added about a tablespoon.  That’s it, all done.  They were DELICIOUS.

Now for the roasted vegetable salad. 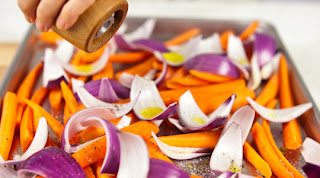 I’ll put in brackets what I did:

Preheat oven to 450.  Chop of the veggies in large chunks.  Place all on a large baking sheet, drizzle with 1 T olive oil and sprinkle with salt.  Toss to coat.  (I hate tossing things on a baking sheet…I think it’s dumb, messy and awkward, so I did this all in a large bowl and then poured it out onto a baking sheet).  Roast 20-25 minutes.  Meanwhile in a small bowl, whisk together remaining ingredients.  Cut spinach/kale into bite sized pieces and rinse and drain beans.  Place veggies in a large bowl with spinach and beans.  Drizzle with dressing and toss to coat.  I cut up a few small chunks of asiago cheese over each serving before giving it to my family.  It added an extra oomph.

Hope you enjoy the meal, I know I did.  Now, what to make tomorrow? Hmmmm…